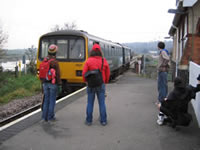 The Cube Skate Team has its own website with links. Here's some details about a few of the members.

James Recognition
Built a ramp in his bedroom when he broke his leg skating. No one takes Richmond Road like him. Director of 'Don't Do tricks', a film about Lady Lucy sk8in
Lady Lucy
Only handbag toting sk8er in town. Star of 'Don't do Tricks'.
Kayle
Sk8s with reed like elegance. Seeing her take a slope in her gingham skirt is one of greatest pleasures.
Heath
Creator of a Bristol Sk8 map and organiser of the International Downhill Skate Tournament. No gradient too steep.
Kyla
Plucky Canadian who borrows boards to great effect.
Kate
Skater. Such a nonchalant attitude to hills.
Simon
Sk8er and long boarder. He goes very, very fast.
Hannah
See below.

I love the Picton Street slope- a gradual build up with a gradient at the end to facilitate a natural slow down. The cars don't seem to mind you going along there, they wait and if you smile at the driver they usually smile back and drive on happy. Dove street skating is like that too. Amy and I skated there a few times and the drivers are all really nice and nod encouragement at you.

The Cube sk8 team got me back into skating. I had a skinny board when I was in single figures; I remember choosing it from the Pied Piper toy shop in Billericay. I just skated up and down the road outside my house and sometimes I'd go down to the shops or to my Nanna and Grandad's house. Doing tricks didn't occur to me. No one else on my street had a board so there was no one to be encouraged by or compete with. Still, that's where I got my balance sorted and luckily it has stayed fairly sorted. I hadn't skated since but then people started to get really into it at the Cube. They'd bring their boards into the bar and office, and the sound of Bones wheels clopping along the parquet stirred something in me. I finally bought a board from Shiners, Bristol. Heath came with me and gave me good advice - which wheels to go for, what tool to get etc. A few weeks later I took it down Ashley hill on my way to work; it was too steep and I hopped off but didn't flip it back in time. It was crushed by a big green truck. A horrid white van man jeered and laughed at me. I haven't been so upset about losing something since I was little. I'd gotten really attached to that board. Eventually I got another one and I'm pleased to say we're still together.

Skating with my friends is a simple pleasure. We don't always talk that much but doing this thing together makes us close. There's no weird competitiveness or one-up-manship. It's not just about friends though. Skating makes me look at my environment differently. The texture of the pavement and road becomes important, I notice gradients and curves in the streets, pedestrians become more important. I don't want to make anyone uneasy - it is because I can go faster than them that I have to take care of them.

Over the last week I've noticed how music can affect my skating. It reduces the world to me, my board, what I am skating on and where I am skating to. This simplification of the world is good for me. I don't think about anything else. It's also good for those people who yell at you, 'Do a trick, love.' 'Go faster!', 'Get off the pavement!' Naturally when this happens I feel as if I am going to fall off and this will fulfil their secret desire. With music in my ears I can't hear what they say and so avoid the falling prophecy. I'm in a film I'm making and it's up to me to cast them into roles that suit my purpose.

I am thinking about the tracks I'm going to put on a skate tape, here's what I've got so far…